Throughout 2012/13 the GLA carried out a programme of research to explore the impact that the London 2012 Games and the work of the GLA has had on the opinions, behaviour and attitudes of Londoners and visitors to London.

This page is where you can find the results from all of the GLA’s Gamestime research.

Infographics
There are a series of infographics that show the key findings of the London 2012 Gamestime research. 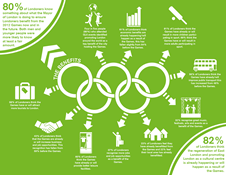 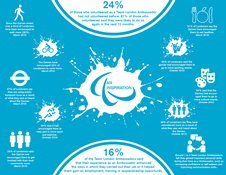 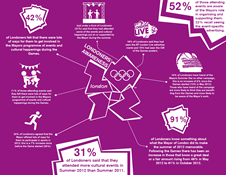 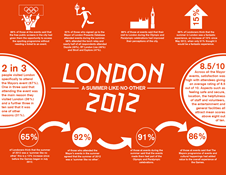 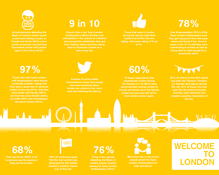 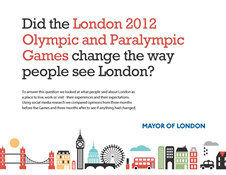 1) To assess any changes in Londoners awareness, perceptions, attitudes and behaviour as a result of the Games.

Research carried out by: TNS London Bus on behalf of the GLA

Method: Four online surveys before during and after the Games

2) To assess the impact and success of GLA’s event programme, marketing materials, city decorations, Team London Ambassadors and explore sentiment, changes in behaviour and perceptions of the Games legacy on London.

Research carried out by: ICM Research on behalf of the GLA

Method: Face to face research at 10 separate events organised or supported by the Mayor of London during the Olympic and Paralympic Games

Sample: 3,102 people who attended Olympic and Paralympics related events during the Games

3) To explore Londoners and visitors experiences of London during the Games and the impact this has had on both their perceptions of London and their behaviour.

Sample: 1,230 people who attended events during the Summer and / or are signed up to the Mayor of London presents database

4) To explore the views and experiences of those who volunteered as a Team London Ambassador and see what impact this experience may have had/ have in the future.

5) To explore the views and experiences of those who engaged with the Team London Ambassadors during their time in London.

Sample: 233 people who spoke to Ambassadors

6) To understand how people talk about London as a place to live work and visit from a natural perspective and assess how this may have changed as a result of the Games.